Anne Stone, the second daughter of Thomas and Ann Stone was born in Hobart on 8 December 1822 and possibly married John Rose in Wellington, New Zealand on 2 July 1847.

I don’t know how long John and Anne Rose were in New Zealand, but we do know that their second daughter Oceana Ellen was born on 29 July 1852 at sea somewhere between Tasmania and New Zealand (although not the direction in which they were travelling!). However in 1859 Anne and her children were living in Victoria and her father was worried about how she was getting on.

In a letter to her brother Alfred at Lockwood, Victoria dated 8 October 1859 he wrote:

I hope you will not fail to communicate with Anne as convenient, as I have not yet heard from her, tho’ since  I received your letter, I have had two more of my letters to her returned through the dead letter office, I had directed them to Dunolly, making I think 5 all returned, and there is now only my last, written in Jany last, and directed to Point Pure Mount Ararat; of all the letters I have written to them since their arrival from New Zealand, but what has been returned.

Emma also wrote to her 8 months ago, but she has not answered it; I am very anxious to hear from them, on acct of Johnny’s bad health. Be sure to ascertain if she received my letter of Jany last, which I wrote in answer to one received from her in Decr last.

Since writing the above I have just received Edward’s letter of 5th Octr enclosing Anne’s note to him, I am very sorry to hear of her long illness…

Again writing on the 20 October he mentions that Anne’s two oldest children, Mary and Johnny have been staying with Alfred and hopes that “Johnny’s health is restored”.

In a letter dated 25 June 1860 Thomas seems cautiously hopeful for the family:

I am thankful that Rose’s prospects are improving, but am sorry to hear Johnny has still his old complaint, but I hope his health may improve, as his age advances, however as such a disease is very enervating and dangerous, it is very necessary to have medical advice for him, and which I hope will be persever’d in.

In the final surviving letter, dated 18th June 1861 Thomas is still worrying about his daughter and her family:

I hear in Lucy’s letter that Anne’s family are still unfortunate and that Rose again intends to go to New Zealand; I should think he must be mad to go there while it is in so disturbed a state, many who are able are leaving for other countries, as property is being burnt and many people in the Country massacred and the war is fast increasing; I am glad their dear children is well and give my love to them all, and I hope as Johnny’s age increases he will overcome his complaint.

From 1863 the following advertisement appeared regularly in the Wellington, New Zealand press:

On occasions there would be notice of other items for sale:

Then there is a much more personal reference in the “Wellington Independent” on 12 April 1864 when the death  of Johnny is announced:

No longer would his family have to worry about the state of his health!

In March of the following year there was a much happier occasion when the family’s eldest child Mary married William Stephen Seymour at the Congregational Church on the 4 March 1865, the Rev. W. M. Fell being the celebrant.

By the end of 1867 John Rose would appear to have had to give up the hair dressing business and is now in charge of the Wellington Swimming Baths and it was at the baths that he died suddenly on the 10 March 1868.

The cause of death was cholera and he was only 51 years old.

There is quite a detailed account of his funeral given in the papers which reveals some of his background and other interests which merit further research.

MILITARY FUNERAL.- Another old resident has departed from our midst. Mr John Rose, recently of Lambton Quay, and more latterly in charge of the Bathing Establishment on Clyde Quay, died, after a brief illness, at an early hour on Monday morning, leaving a family to mourn his loss. John Rose served for some years as a private in the 71st Highland Light Infantry, and during the latter portion of his life was a prominent member of the band of the Rifles. Yesterday afternoon his remains were followed to the cemetery by most of the volunteers in town, the ﬁring party being composed of Veterans. The parade was under the command of Capt. Buck, Veteran Volunteers, and as the funeral procession marched down Lambton Quay,most of the places of business were closed. On reaching the burial ground, the last sad offices for the dead were performed by the Rev. A. Stock, the Veterans ﬁred three volleys in the air, and the funeral party marched off the ground at a quick step, and were dismissed on the Reclaimed Land. 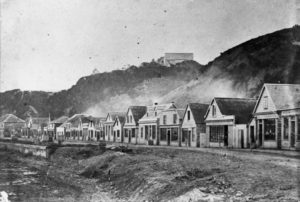 Row of businesses along Lambton Quay, Wellington, north of the Crown and Anchor Hotel. The waterfront is on the left. Photograph taken in the 1860s by Frank J Denton.