The “Prince of Wales” 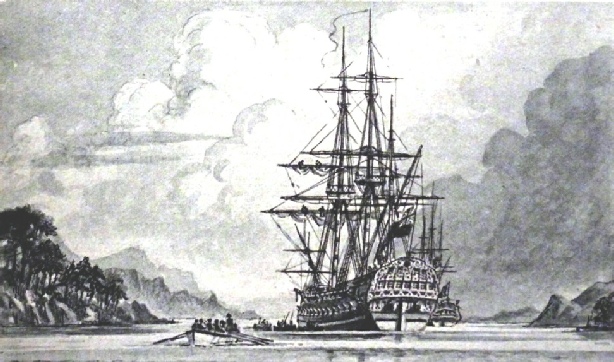 The “Prince of Wales”

The “Prince of Wales” was the last transport ship to be added to the First Fleet and one of the newest, having been built on the Thames in 1786. She was a square-sterned barque of 350 tons, 31 m long and the height between the decks was about 1.75 m.

She had a crew of about 25, carried 47 female and 2 male convicts as well as 31 marines, 16 marine wives and 6 marine children.

Like all the marines in the First Fleet, John Kennedy volunteered to be part of the expedition, having previously served with the 58th (Plymouth) Company on the guardship “Carnatic”. The marines were to act as guards on each transport during the voyage and on arrival in New South Wales there were to form a military establishment which would preserve order and protect the settlement. They were to serve for three years from the time of their arrival in the colony.

After leaving Portsmouth on the 13 May the fleet arrived at Santa Cruz in the Canary Islands on the 3 June and stayed there for a week. During that time the marines and their wives were allowed to go ashore and marines and convicts were issued with wine and fresh beef.

They would be at sea for eight weeks on the next leg of the journey, crossing the Atlantic to Rio de Janeiro in Brazil where they arrived on 4 August. This would be a trying part of the voyage as they were passing through the tropics and the weather was often very unpleasant and sailing slow. For example on the 23 June “the weather became exceedingly dark, warm, and close, with heavy rain, a temperature of the atmosphere very common on approaching the equator, and very much to be dreaded, as the health is greatly endangered thereby.” John White’s Journal.

These conditions must have had a melancholy effect on Mary Kennedy as she wrote on one of the pages in her hymn book, “In 1787, the 24th and 25th June I dreamed that my father was dead which made me very uneasy. Mary Kennedy.”