Accompanied by her brother Joseph Withers, Ann and Thomas Stone sailed from Portsmouth on the 11 June 1819 in the “David Shaw”. Their cabin passage would have cost approximately ₤100, the price usually demanded by the captains of such free traders.

The journey took  four months, a long monotonous journey with only one port of call, St Jago, a small island off Cape Verde which is now known as Sao Tiago. Their intended destination was Port Jackson but the long journey had taken toll of Ann’s health and she was expecting their first child. 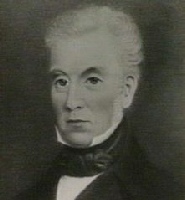 When the “David Shaw” berthed at Hobart Town the three young people applied to Lieutenant Governor William Sorell for permission to land and settle there. This was granted and the Lieutenant Governor (pictured right) reported his actions to Governor Macquarie in Sydney in a dispatch:

“Mr. T. Stone and Wife, and Mr. Withers, his brother-in-law, brought no letter from the Secy. of State, and I was therefore doubtful of the propriety of allowing them to land here; but upon considering the hardship which they might feel and represent of being forced from hence at the end of a long voyage without any charge, I judged it best to accede to their application and to report their situation to Your Excellency.

“It does not appear from these persons coming out that any restriction exists, and if the only means of preventing those who venture to this Country without the Secy. of State’s Authority, be that of sending them away on arrival, it would be one which in many cases would be impractible and in most involving questions which would be painful to the Chief Colonial Authority. Should Your Excellency disapprove of the permission to land, which I gave to Mr. Stone, I request to be honored with your instructions.”

Less than a month after arriving in Hobart Town the following advertisement appeared which shows that Joseph Withers had found accommodation and was ready to set up in business.

The Public are respectfully informed, that J. Withers, recently from England, has commenced his Business as a Cooper, at a new brick house in Bridge Street, corner of Liverpool Street, where every Article in that Line will be made in the neatest Manner, and on the most moderate Terms,—Tubs, Buckets, Pails, Churns, &c. ready made,—Jobs, and Work by the Day, performed reasonably.

Similarly Thomas and Ann Stone had found somewhere to live and Thomas was now looking to set up as a teacher. A fortnight later this advertisement appeared.

Thomas Stone respectfully informs the Inhabitants of Hobart Town, that on Monday the 6th December he intends opening a SCHOOL for the Education of Young Gentlemen, at his cottage on Hospital Hill.—The Terms moderate; and he hopes by unremitting Attention to Pupils entrusted to his Care to merit Countenance and Support.

At a time when there was no officially organized education system in Tasmania it would appear that Thomas Stone’s new venture met with some success. At the beginning of 1820 he again invited custom.

Thomas Stone returns his most sincere Thanks to the Inhabitants of Hobart Town, for the very liberal Support he has received since the opening of his ACADEMY for the Education of Young Gentlemen; and encouraged by the Confidence they have placed in him, he begs Leave to inform them, that for the Accommodation of Families residing in the Country, it is his Intention to take Six Young Gentlemen as Boarders; and, by every Attention being paid both to their Instruction and Comfort, he hopes to merit a Continuance of that Patronage they have bestowed upon him.

* Terms may be known by applying at his Academy, in Bridge-street.