Apparently Mary Kennedy’s husband was also finding the conditions difficult but his fall from grace was not an isolated event amongst the marines on the Prince of Wales. The situation is summed up by John Moore in “The First Fleet Marines 1786-1792”, page 55:

“At about the same time, glimpses of events aboard the Prince of Wales suggest that the long voyage and the cramped conditions were telling on marine performance and relationships. Privates Arthur Dougherty and Robert Ryan were charged on 24 June by Lieutenant Maxwell for disobeying orders. Maxwell apparently took so serious a view of the incidents that he and Sergeant Scott took Dougherty and Ryan to the Sirius where they remained for the night. Next day, Ross [Major Robert Ross, the commander of the Marines] formed a court martial aboard the Prince of Wales, where Dougherty was acquitted, but Ryan received three hundred lashes given immediately.

“Strained human relationships were also appearing. On 30 June, Sergeant Scott ceased sitting at the same table as sergeant Hume because Mrs Hume had, for some reason, taken exception to Scott. Then some days later Sergeant Kennedy of the Prince of Wales got thoroughly drunk, and after abusing several people and making a general nuisance of himself, jumped down a hatchway, falling heavily on Sergeant Scott’s wife, who was in her seventh month of pregnancy. Her husband recorded that she got a severe fright for it “hurted her greatley”. Lieutenant Maxwell had Kennedy placed under guard whilst awaiting his court martial.” 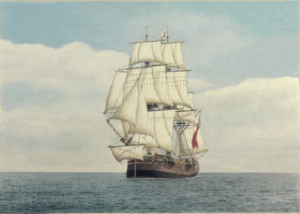 The Alexander from a painting by Frank Allen. The Barque Alexander was a three master square rig ship of 452 tons and the largest ship in the Fleet. She had been built at Hull in 1783 and had two decks and a quarter deck. The distance between decks was between 7’3” and 6’11” which would have provided more room than some of the other ships. She was 114 ft long (34.75 m) with a beam of 31 ft (9.5 m). When she left Portsmouth she was carrying 30 crew, 41 marines and 195 male convicts. The health of the latter was the cause for some concern right from the start, with 16 men dying from fever before they even set sail. Another 15 convicts were to die during the journey, the most for any ship in the Fleet.
The cause of the fever was very likely the poor management of the ship’s bilge which wasn’t rectified until June 1787.

Apparently John Kennedy remained in confinement until  after the Fleet arrived in Rio de Janeiro on the 6th August, then on the 9th August Major Ross ordered that he change places with Sergeant William Clayfield on the Alexander. It is unlikely that Mary Kennedy changed ships with her husband as the Alexander was an all-male ship.

The Fleet stayed in Rio until the 4th September and during that time the marines and the convicts were given fresh rations including beef and rice with the addition of vegetables for the children. Mary Kennedy was probably at a disadvantage after her husband’s transfer during the time in Rio. By contrast Mrs June Scott was able to go for walks ashore with her husband in the weeks before safely giving birth to her daughter Elizabeth at 1.00 pm on the 29th August. The baby was christened five days later on the Prince of Wales by the Rev. Richard Johnson.