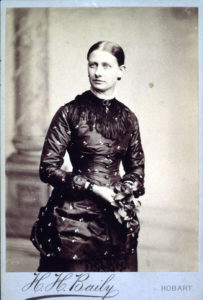 “Miss Margaret A. Hope, who died at Hobart last week, was not only a leading artist of Tasmania; she was held by those who knew her to be one of the finest of women, faithful in friendship, true to her convictions, and unswerving in the path of duty. She also possessed a kindness of disposition which endeared her to those with whom she came in contact.

“During the whole of her life she was devoted to her profession, and beautiful landscapes from her brush adorn the walls of many Australian homes, while others are to be found in England. In the painting of Tasmanian wild flowers she was probably without a peer, and her large collection includes studies of plants and flowers now extinct.

“Miss Hope had an early acquaintance with the North-West Coast, for in her young days she filled the position of governess in a gentleman’s family at Leith. The journey from Hobart at that time, prior to railway transit, and when the postal service was irregular, was something of an adventure, and upon arriving at Forth she found no one there to meet her. She was undaunted, however, and after waiting a while a seat was offered her in Sir Edward Braddon’s equipage, and thus she reached her destination.

“While at Leith she collected many specimens of wild flowers for painting. Later she paid lengthy visits to her sisters, Mrs. E. Easton and Mrs. F. Cotton, in the Sheffield district, where the grandeur of thc scenery impressed itself upon her, and very fine pictures of Mt. Roland and the surrounding ranges, and of Hell’s Gates at Barrington, were the result. More recently, when visiting another sister, Mrs. W. D. Nicholas, at Latrobe, the peaceful beauty of Bell’s Parade appealed to her as worthy of perpetuation.

“To take a country walk with Miss Hope was an interesting experience. The wayside flowers were her friends, and sometimes a particular view would take her fancy, and after pausing for two or three minutes to make the details her own she could at a future time reproduce it with accuracy. 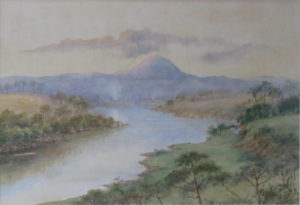 “She worked unceasingly both as an artist and a teacher of painting during her long life of 86 years, and she also visited some of the other Australian States and New Zealand, being at one time employed by the Queensland Government to paint the native flora for reference books.

“Miss Hope’s parents were among the pioneers of Tasmania. Her father came out from Scotland as a tutor to a Mr. Matteson, and on arriving married Miss Emma Stone, who is believed to have been the first white child born in Hobart. Her father conducted a school there, and among the scholars were three or four aboriginal picaninnies. Members of Tasmania’s “lost race” were apparently fairly numerous in those days, as Mrs. Hope had a vivid recollection of being taken as a child to witness a corroboree held in what is now the King’s Domain.

“Mr. and Mrs. Hope reared a family of 12 children. The two older sons entered the medical profession and the church respectively, whilst another was on the educational staff of the Tasmanian Department for many years. Miss Margaret Hope, who was the second daughter, is survived by two brothers and three sisters.

“The Misses Hope, of Heale Hill, East Devonport, are among the numerous nieces, and there are also many nephews, in whose welfare she always showed a keen and practical interest. An ideal aunt, she yet found time and opportunity to assist many a good and charitable cause, donating artistic gifts to church fairs and other efforts, and during the war augmenting the patriotic funds by the sale of dried gum leaves, which she had transformed by the magic of her brush into things of beauty. She received much encouragement about this time from the warm appreciation of her work shown by Sir Francis Newdegate, who was then State Governor.

“Here was a beneficent life, and one which will not be forgotten.”

Margaret Anderson Hope is just one of the members of a rather remarkable family. Her oldest brother James Somerville Hope was sent to live with family in Scotland and after finishing school there was a student at the Edinburgh University Medical School (the most prestigious establishment of its kind at the time) and eventually graduated M.D.. He also obtained the diploma of the Royal College of Surgeons, Edinburgh in 1862. He returned to Tasmania and established a practice at Green Ponds  and was the first Medical Health Officer appointed by the municipality. Sadly he died on the 21 May 1867 at Melton Mowbray “from the effects of a fall from his horse”.

Her next brother Charles Alexander Hope was the first person to win a “Tasmanian Scholarship” which entitled him to £200 a year for four years at a British University. There were 16 candidates and they were examined in a variety of subjects. Charles, who was a student at the “High School, Hobart Town; Rev. R. D. Harris, M.A., Master” topped the results coming first in First Class with Gold Medals for Latin, English and Mathematics. He also achieved good results in Greek (1st class) and French (2nd Class). 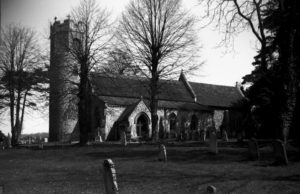 He then went to St John’s College, Cambridge and in 1867 graduated B. A., Senior Optime (second class honours in Mathematics). He was ordained Deacon by the Bishop of London in 1867 and priest in 1868.

After serving curacies at Roehampton and Hellesdon he became Rector of Taverham in the Diocese of Norwich in 1892 where he died in 1922, having never returned to Tasmania.

Charles married Louisa Chambers Roe on 21 April 1870 and they had one son and eight daughters. Louisa died at Taverham on 10 November 1906, aged sixty.

In January 1890 their parents, James and Emma Hope visited England and were able to visit Charles when he was living at Hellesdon.