In September 1822 Thomas Stone again advertised the opening of his school, acknowledging the “liberal Encouragement he met with during the last three years.” He gives details of a quite extensive curriculum: “Writing, Arithmetic, English Grammar, History, Geography, and Elocution, together with Dancing and the Rudiments of Drawing and Latin.” 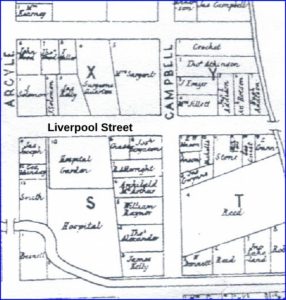 Contemporary map of the NE corner of Hobart

The address is now given as “his House in Liverpool Street”. We can gain some idea of what it would have looked like by comparing a contemporary map of Hobart shown below) together with the pictorial view of Hobart reproduced at the top of this page.

The map shows a block labelled “Stone” at the north-east end of Liverpool Street not far from the Bridge over the creek which separated the town from the Government Domain.

At the other end of the block was Campbell Street which to the left was known as Bridge Street as it crossed a bridge over the Hobart Rivulet at Collins Street before continuing on to the Market Place. Beyond was Hunter Street and Macquarie Point.