A Wedding in the Family

Thomas and Ann Stone’s life was thrown into disarray when their employment at the King’s Orphan School was suddenly brought to an end on the 30 June 1836, without them receiving the usual three months notice.

As if looking for a new home for their family was not enough to occupy them they were almost immediately involved in the wedding of their eldest daughter, sixteen year old Emma, which took place in St David’s Church, Hobart on the 6 July 1836. The service was conducted by the Rev’d William Bedford, the minister at St David’s as well as a member of the Committee of the King’s Orphan Schools. 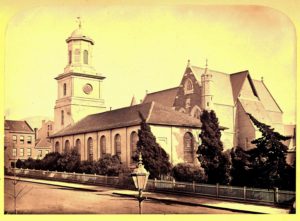 Emma’s husband, James Hope, was a young Scotsman from West Calder, West Lothian, Scotland (he would turn twenty-six on the 17 July) who had arrived in Hobart on the “Princess Victoria” in January 1834.

The notice of the wedding in “Bent’s News and Tasmanian Three-Penny Register” for Saturday 9 July indicates that he was a resident of Ross, but gives no other information.

However we know that before the end of 1834 James was in charge of a store in Ross,  owned by Mr James Hamilton of Campbelltown when it was in the news after a violent attack and robbery.

At about ten o’clock in the evening on Monday 24 November 1834 four armed men entered the building and after tying up James Hope and the two boys who were with him, stole an “immense quantity of goods” including men’s clothing.

The perpetrators were apprehended in December and brought to trial on Wednesday 28 January. The proceedings lasted for nine hours after which they were found guilty and all sentenced to death.

Eventually James went into business on his own behalf and in 1840 was granted a Public House licence for the Victoria Hotel in Ross. In 1843 his license was renewed for the Ross Hotel which was established by William Saddler in 1835 and built by convicts using local, hand cut sandstone.

In December 1854 his licence was renewed after he had missed paying the fee for three months but soon afterwards it was advertised for sale by auction on Wednesday 10 January 1855. In February the licence was transferred to Elijah Edward Panton.

James and Emma’s first seven children were born while they were living in Ross and according to the description of the hotel when it was put up for sale it would have been a good place in which to bring up a family.

“This fine property comprises altogether upwards of eight acres of ground, bounded on three sides by three of the principal streets in the town, the frontage on the main street (the road from Launceston to Hobart Town) comprehending an extent of 6 chains, or 330 feet, and on each of these other streets 26 chains, or 1710 feet.

“The HOTEL Is well and substantially built, with three fronts of fine picked free stone, laid in 9-inch courses, containing extensive underground cellarage, seven rooms and pantry on the ground floor, one of which is an extensive apartment 28 feet long by 18 feet in width. On the first floor are six large commodious bedrooms, and one of smaller dimensions, with a new wing nearly finished, containing four bedrooms and two convenient closets, halls, passages, and staircases. There is a large detached kitchen, with oven, stove, sink. &c., store room, capacious laundry and wash-house, barrack-room &c.

“There are two stone-built stables, one ten, the other nine stalls, each with lofts above, capable together of holding twenty tons of hay; A coach house, a four-stall wooden stable, with loft, a two-stall cow house, cart shed, piggery, fowl house, large paved yard, cattle yard, stock yard, with a good well, pump, and stone trough.

“The Garden, which, comprises an acre of ground, well laid out, is stocked with all kinds of choice fruit trees and esculent vegetables; also two paddocks, well and truly fenced, one containing one and a half acre, the other about four and a half acres.

“There is also… a neat COTTAGE of four rooms, with kitchen and stabling attached, all built of stone, with yards, garden, &c, occupying about half an acre of ground. This is nominally rented at present at £16 per annum, but is worth much more.”