The Wreck of HMS Sirius 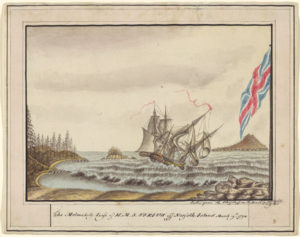 The HMS Sirius was the guardian or Flag Ship of the First Fleet during its 15 000 mile, six month journey from England to Australia in 1787-1788. Following its First Fleet voyage the Sirius became the main defence for the colony of New South Wales and its primary supply line and communication link with Great Britain.

By September 1788 the shortage of food and supplies at Sydney Cove was so great that the Sirius was dispatched to Cape Town, South Africa to purchase additional supplies, especially flour and medicines. Under the command of John Hunter, the Sirius survived a treacherous nine month round trip to bring much needed supplies to the colony. On its return the ship was closely examined and spent the following four months undergoing much needed repairs from storm damage and other defects. During this time the situation for the colony became critical as the settlement failed in its early attempts at self-sufficiency. The HMS Guardian was dispatched from England in September in 1789 to re-supply the colony but it failed to reach Australia.

By February 1790 the shortage of supplies at Port Jackson was acute and the settlement was in danger of starvation and abandonment. To avert disaster, Governor Philip dispatched the Sirius and the HMS Supply to Norfolk Island with convicts and Royal Marines in the hope that the conditions on the island would be more conducive to self sufficiency and relieve pressure on the remaining government supplies. The Sirius was then to proceed to China to purchase desperately needed supplies for the colony

Loss of the Sirius

After a stormy passage, the Supply and Sirius arrived at Norfolk Island on 13 March 1790 and managed to send the marines and most of the convicts ashore at Cascade Bay before being forced out to sea by bad weather. Both vessels moved to the other side of the Island opposite the main settlement at Kingston, hoping to find a more sheltered anchorage, but strong winds again threatened them after they entered the bay. The Supply managed to turn around and headed out to safety but the Sirius was stranded in the bay, with onshore winds and currents making it impossible for the ship to avoid a reef lying 200 metres from shore. Unable to tack against the prevailing wind, the Sirius was thrown backwards on to the reef and its hull was damaged beyond repair.

The loss of the Sirius left the early settlers at Norfolk Island and Sydney Cove feeling utterly devastated. Early settlers considered the ship their insurance against starvation and adversity. The colony in Sydney was left with barely three months worth of supplies and was in danger of collapse and abandonment. In spite of the loss of the Sirius the decision by Governor Phillip to move soldiers and convicts to Norfolk Island proved correct and ensured the colony’s survival until further supplies arrived from England.

Among those who scrambled ashore were Mary and John Kennedy but due to a shortage of ships and food in Sydney, they and the other survivors remained on Norfolk Island for eleven months before being rescued, arriving in Sydney on 26 February 1791. They then returned to England by HMS Gorgon in December 1791. John Kennedy was discharged from the Marines at Plymouth on 29 June 1792. 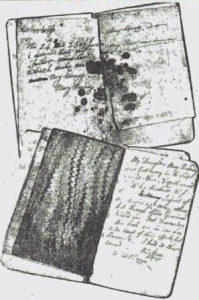 There is a memento of their experience preserved in  the Bristol Library. It is a book of hymns written by Mary’s uncle, John Cennick which had originally belonged to her grandmother. There are a number of notes relating to the family on the fly-leaves, including the following:

“My daughter Mary Kennedy was Cast away in the Ship Sirius Near Norfolk Island South Seas with her husband Mr J. Kennedy, Sarjant of Marines (and many others) but through God’s Gracious Providence not Drowned. This book was in her box with some of their effects but Recovered. I had it New bound. Ja. Stone. Bristol, 1794.”