Although Thomas and Ann Stone are the ancestors of our part of the Stone family in Australia they were not the first members of the family to come to this country.

In fact Thomas’s aunt, Mary Kennedy (née Stone) arrived with the First Fleet in 1788, accompanying her husband, Sergeant John Kennedy of the marines.

John and Mary sailed from Portsmouth in the “Prince of Wales” with the rest of the fleet on 13 May 1787. Travelling via the Canary Islands, Rio de Janeiro and the Cape of Good Hope they arrived at Botany Bay with the second part of the fleet on 20 January 1788.

The eleven vessels in the First Fleet travelled a distance of 15,900 miles (25,590 kilometres) in 252 days (68 days in ports and 184 days at sea). A total of about 1530 people left England, about 70 died or left the fleet and there were 22 births, with the result that about 1480 safely reached Sydney Cove. This was an amazing achievement for the time. 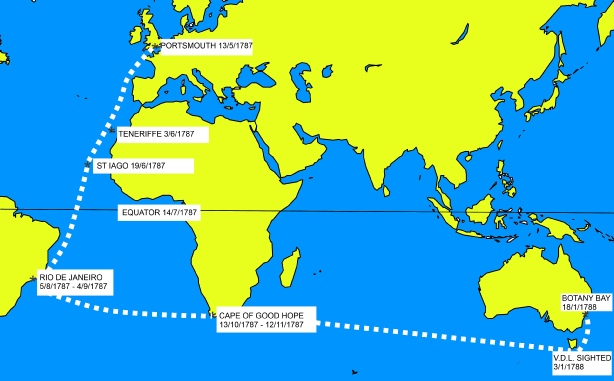