On 13 July, 1817, Thomas and Ann were married in the Church of St John the Baptist, Bedminster, Bristol. The Marriage Register has these details: 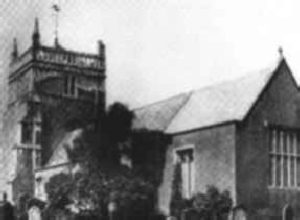 The old Church of St John, Bedminister. Matthew’s Directory of 1793/4 has the following description: “Bedminster Church, dedicated to St John Baptist, is very ancient; on the north-west abutment of the tower is a stone with a date 1003 upon it; so that it must have been built in the reign of King Ethelred… The Church, (situated in a southern, large and populous suburb of Bristol) has two aisles,a gallery, several monuments and a handsome Altarpiece. The tower is large, low, has stone-railing and four pinnacles, and a rising between them on the top, which supports a vane: it has two bells, on the largest of which the hour is struck. This Church has the appearance of great antiquity, and stands in a very pleasant and rural Church-yard.” This church saw its last service on 25 June 1854, and was demolished in favour of a new church on the same site.

“1817 July 13th. Thomas Stone Bach., and Ann Withers Spinster, both of this parish, by Banns.”
Both signed their names. Witnesses were Sarah Stone and John Daniell Jnr.

The wedding was reported in at least three Bristol papers, “Felix Farley’s Bristol Journal of 2 August 1817; The “Bristol Mirror” of the same date, and the “Bristol Gazette”, as follows:

It is interesting that the marriage record states that they were both from the Parish of St John the Baptist, Bedminster when we have no record that either Ann or Thomas lived there.

Thomas and Ann went to live at Lawrence Hill, Bristol. He had excellent prospects in England, but it wasn’t long before Thomas and Ann decided to migrate to Australia. What could be the reason for this decision?

According to Alex and Nancy Stone, “The marriage was opposed by Thomas’ father, for although apparently he liked Ann quite well, he did not consider her a suitable match for his eldest son.” Effloresco (1992) p33

However there could be other reasons for making such a decision!

Even if there were no family reasons for deciding to migrate to New South Wales there were good reasons why one might take that decision at the time. These are set out by Richard and Margaret Stone in their book, Early Pioneers of Tasmania (1969).

“What had prompted them to undertake such a journey with the prospect of a new life in a relatively unknown environment can only be surmised. Part of the impetus must have been derived from the atmosphere in England at the time. 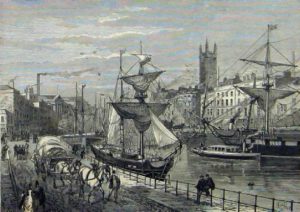 Bristol in the mid 19th century

“The lengthy and nationally exhausting Napoleonic wars were over and England was sliding into a long severe depression.

“In 1816 the British government had removed all restrictions on free immigration to New South Wales. Gradually publications began to appear in England telling of the advantages to be experienced in the colony and reassuring the prospective settlers that “This land of convicts and kangaroos is beginning to rise into a fine and flourishing settlement”.

“Governor Macquarie requested in 1818 that more “respected monied men” be sent out to offset the predominance of convicts and poor settlers that had been despatched to the colony over the years.

“To the Englishman surrounded by the ravages of economic depression and the onset of the age of industrialisation such prospects augured for rural happiness and prosperity.”